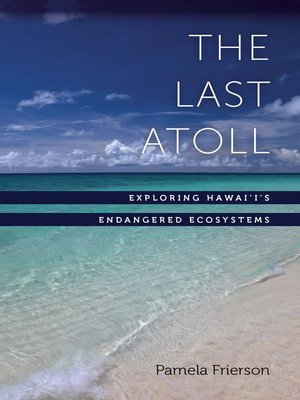 View more libraries...
Far from the beach-towel–covered sands of Waikiki there is a hidden Hawaii: remote islands and atolls that are some of the wildest—and at the same time most vulnerable—places on earth.
In The Last Atoll, Pamela Frierson chronicles a decade of travels to this wildlife-teeming outback of the Hawaiian archipelago. Spanning 1200 miles, the Northwestern Islands are home to some of the world's rarest species, including the Hawaiian monk seal, the Laysan duck, and the Nihoa millerbird. The vast surrounding reefs are one of the last intact Pacific ecosystems, dominated by the big predators: giant jacks, groupers, and sharks.
But according to Frierson this far-flung region is “both pristine and plundered." In a series of arduous journeys she uncovers a history of use and abuse. At Midway Atoll she watches the politics of clean-up as a naval facility shuts down, and learns about clandestine Cold War activities. At Laysan Island she finds a legacy of guano mining and bird feather hunting that led to the extinction of three endemic landbirds. In a compelling adventure tale, this award-wining Pacific writer explores lives both human and wild at one of the extreme edges of the world.