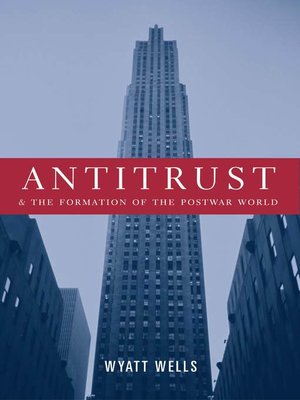 Antitrust and the Formation of the Postwar World

HistoryLawPoliticsNonfiction
Today antitrust law shapes the policy of almost every large company, no matter where headquartered. But this wasn't always the case. Before World War II, the laws of most industrial countries tolerated and even encouraged cartels, whereas American statutes banned them. In the wake of World War II, the United States devoted considerable resources to building a liberal economic order, which Washington believed was necessary to preserving not only prosperity but also peace after the war. Antitrust was a cornerstone of that policy. This fascinating book shows how the United States sought to impose—and with what results—its antitrust policy on other nations, especially in Europe and Japan.

Wyatt Wells chronicles how the attack on cartels and monopoly abroad affected everything from energy policy and trade negotiations to the occupation of Germany and Japan. He shows how a small group of zealots led by Thurman Arnold, who became head of the Justice Department's Antitrust Division in 1938, targeted cartels and large companies throughout the world: IG Farben of Germany, Mitsui and Mitsubishi of Japan, Imperial Chemical Industries of Britain, Philips of the Netherlands, DuPont and General Electric of the United States, and more. Wells brilliantly shows how subsequently, the architects of the postwar economy—notably Lucius Clay, John McCloy, William Clayton, Jean Monnet, and Ludwig Erhard—uncoupled political ideology from antitrust policy, transforming Arnold's effort into a means to promote business efficiency and encourage competition.
HistoryLawPoliticsNonfiction

Wyatt Wells is associate professor of history at Auburn University at Montgomery. He is the author of Economist in an Uncertain World: Arthur F. Burns and the Federal Reserve, 1970-1978.

More about Wyatt Wells
Antitrust and the Formation of the Postwar World
Copy and paste the code into your website.
New here? Learn how to read digital books for free