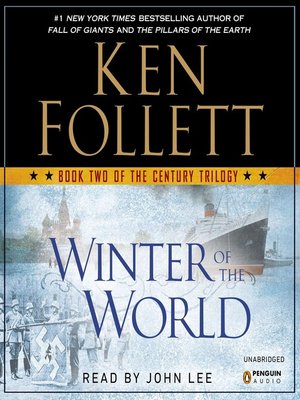 Winter of the World

FictionHistorical Fiction
Picking up where Fall of Giants, the first novel in the extraordinary Century Trilogy, left off, Winter of the World follows its five interrelated families—American, German, Russian, English, and Welsh—through a time of enormous social, political, and economic turmoil, beginning with the rise of the Third Reich, through the great dramas of World War II, and into the beginning of the long Cold War.
Carla von Ulrich, born of German and English parents, finds her life engulfed by the Nazi tide until daring to commit a deed of great courage and heartbreak . . . . American brothers Woody and Chuck Dewar, each with a secret, take separate paths to momentous events, one in Washington, the other in the bloody jungles of the Pacific . . . . English student Lloyd Williams discovers in the crucible of the Spanish Civil War that he must fight Communism just as hard as Fascism . . . . Daisy Peshkov, a driven social climber, cares only for popularity and the fast set until war transforms her life, while her cousin Volodya carves out a position in Soviet intelligence that will affect not only this war but also the war to come.
From the Paperback edition.
FictionHistorical Fiction

Ken Follett burst into the book world with Eye of the Needle, an award-winning thriller and international bestseller. After several more successful thrillers, he surprised everyone with The Pillars of the Earth and its long-awaited sequel, World W...

More about Ken Follett
Winter of the World
Copy and paste the code into your website.
New here? Learn how to read digital books for free