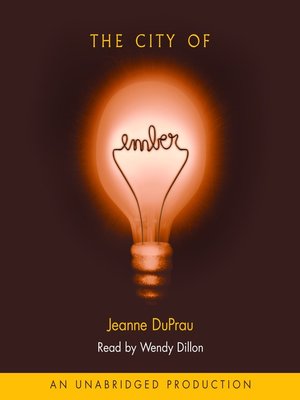 The City of Ember

Juvenile FictionScience Fiction
Ember is the only light in a dark world. But when its lamps begin to flicker, two friends must race to escape the dark. This highly acclaimed adventure series is a modern-day classic—with over 4 MILLION copies sold!

The city of Ember was built as a last refuge for the human race. Two hundred years later, the great lamps that light the city are beginning to dim. When Lina finds part of an ancient message, she's sure it holds a secret that will save the city. Now, she and her friend Doon must race to figure out the clues to keep the lights on. If they succeed, they will have to convince everyone to follow them into danger. But if they fail? The lights will burn out and the darkness will close in forever.

"A harrowing journey into the unknown, and cryptic messages for readers to decipher." —Kirkus Reviews, Starred
Juvenile FictionScience Fiction

Jeanne DuPrau has written several books of nonfiction for children and adults. She has been a teacher, an editor, and a technical writer. The City of Ember is her first novel for middle graders. She is currently working on the sequel at her home i...

More about Jeanne DuPrau
The City of Ember
Copy and paste the code into your website.
New here? Learn how to read digital books for free