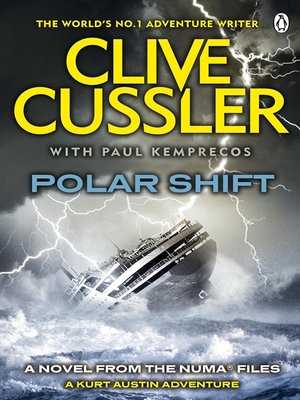 Polar Shift is the sixth NUMA Files novel by the inimitable Clive Cussler.

Giant freak waves send an unsinkable cargo ship to the bottom of the Atlantic and a herd of killer whales attack a party of kayakers in the Pacific - random events, or evidence of polar shift?

For Kurt Austin of NUMA these two seemingly unconnected incidents are harbingers of a global phenomenon that will mark the end of civilization! A secret organization aiming to bring down the world's elite powers have discovered the means to bring about polar shift - a catastrophic event that will cause earthquakes, lava eruptions, tsunami, electrical disruption and giant whirlpools.

Austin knows that he and NUMA cannot fail this time. The end of the world is coming unless he and the team can track down the conspirators or reverse the effects of the Earth's most destructive power: polar shift!

'The guy I read' Tom Clancy

Bestselling author Clive Cussler has kept millions of readers hooked with adventures at sea, exotic locations, cutting-edge science and page-turning pace for four decades. As well as the NUMA Files series there are also the Oregon Files, the Dirk Pitt stories (which started it all), the Isaac Bell adventures and the Fargo series. The other titles in the NUMA files series are: Serpent, Blue Gold, Fire Ice, White Death, Lost City, The Navigator, Medusa, Devil's Gate, and The Storm.

More about Clive Cussler
Polar Shift
Copy and paste the code into your website.
New here? Learn how to read digital books for free