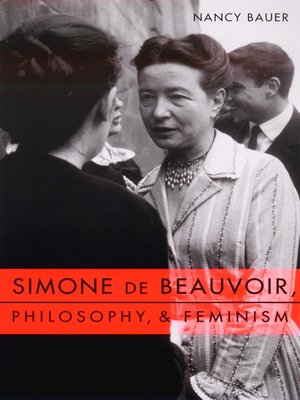 PhilosophySociologyWomen's StudiesNonfiction
In the introduction to The Second Sex, Simone de Beauvoir notes that "a man never begins by establishing himself as an individual of a certain sex: his being a man poses no problem." Nancy Bauer begins her book by asking: "Then what kind of a problem does being a woman pose?" Bauer's aim is to show that in answering this question The Second Sex dramatizes the extent to which being a woman poses a philosophical problem.

This book is a call for philosophers as well as feminists to turn, or return to, The Second Sex. Bauer shows that Beauvoir's magnum opus, written a quarter-century before the development of contemporary feminist philosophy, constitutes a meditation on the relationship between women and philosophy that remains profoundly undervalued. She argues that the extraordinary effect The Second Sex has had on women's lives, then and now, can be traced to Beauvoir's discovery of a new way to philosophize—a way grounded in her identity as a woman. In offering a new interpretation of The Second Sex, Bauer shows how philosophy can be politically productive for women while remaining genuinely philosophical.
PhilosophySociologyWomen's StudiesNonfiction

Nancy Bauer is assistant professor of philosophy at Tufts University.

More about Nancy Bauer
Simone de Beauvoir, Philosophy, and Feminism
Copy and paste the code into your website.
New here? Learn how to read digital books for free