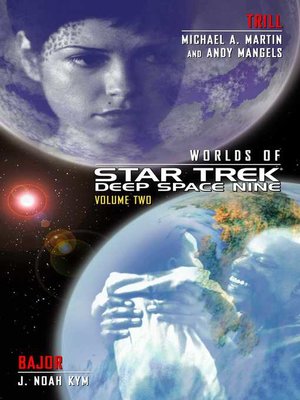 TRILL. The Trill are a combination of a symbiont and a host. The symbiont lives for hundreds of years in one host after another: each body is different, each personality is different, each life is different - but all of them are one. The symbiont accumulates experiences, relationships, memories ... Andy Mangels and Michael A. Martin have set their story on this most multi-layered and extraordinary of worlds. When Trill involvement in the assassination of an allied world leader comes to light, the reason lies in the terrifying and tragic origins of the Trill - and the answers reveal unsuspected links to other regions of the Star Trek universe.
BAJOR. Political intrigue and interpersonal conflict in the style of The West Wing dominate on Deep Space Nine's core world of Bajor. The future of Bajor and the new role of long-missing Captain Benjamin Sisko are linked as this tale lays the groundwork for a major new storyline in further Deep Space Nine novels.

More about Andy Mangels
Worlds of Deep Space Nine 2
Copy and paste the code into your website.
New here? Learn how to read digital books for free