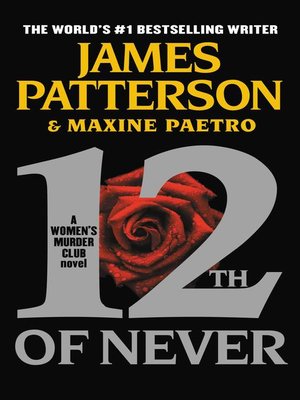 It's finally time! Detective Lindsay Boxer is in labor--while two killers are on the loose.

Lindsay Boxer's baby is finally born! But when her husband Joe gets back from Washington, DC, he has terrible news--he's lost his job. After only a week at home with her new baby, Lindsay has to return to work.

Then she finds that her replacement, Detective Mackie Morales, has taken over the department's biggest case: A football player for the San Francisco 49ers has been accused of murdering his girlfriend.

At the same time, Lindsay gets one of the strangest cases of her career. An eccentric English professor has been having vivid nightmares about a violent murder. Lindsay doesn't believe him, but then a shooting is called in--and it fits the professor's description to the last detail.

But all the crimes in the world seem like nothing when Lindsay is suddenly faced with the possiblity of the biggest loss of her life.

More about James Patterson
12th of Never
Copy and paste the code into your website.
New here? Learn how to read digital books for free