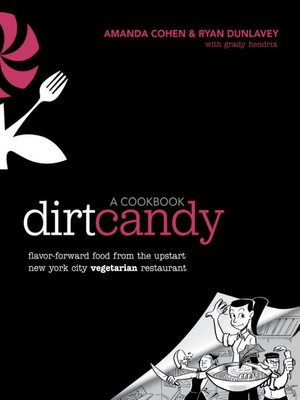 Comic and Graphic BooksFiction
From chef-owner of the popular all-vegetable New York City restaurant, Dirt Candy, a cookbook of nearly 100 vegetable recipes for home cooks everywhere.
Amanda Cohen does not play by the rules. Her vegetable recipes are sophisticated and daring, beloved by omnivore, vegetarian, and vegan diners alike. Dirt Candy: A Cookbook shares the secrets to making her flavorful dishes—from indulgent Stone-Ground Grits with Pickled Shiitakes and Tempura Poached Egg, to hearty Smoked Cauliflower and Waffles with Horseradish Cream Sauce, to playfully addictive Popcorn Pudding with Caramel Popcorn. It also details Amanda's crazy story of building a restaurant from the ground up to its success, becoming one of the most popular restaurants in New York City—all illustrated as a brilliant graphic novel. Both a great read and a source of kitchen inspiration, Dirt Candy: A Cookbook is a must-have for any home cook looking to push the boundaries of vegetable cooking.
Comic and Graphic BooksFiction

AMANDA COHEN is the chef-owner of Dirt Candy, an all-vegetable restaurant located in New York City's East Village that is recommended by the Michelin guide. Cohen, who has written about food for Saveur, Eater, Salon, and Esquire, was the first veg...

More about Amanda Cohen
Dirt Candy
Copy and paste the code into your website.
New here? Learn how to read digital books for free