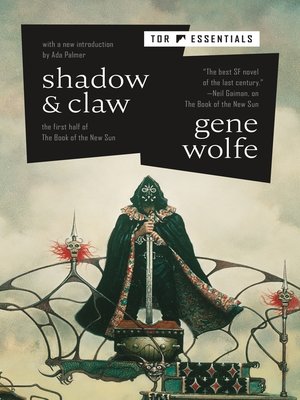 The Book of the New Sun is unanimously acclaimed as Gene Wolfe's most remarkable work, hailed as "a masterpiece of science fantasy comparable in importance to the major works of Tolkien and Lewis" by Publishers Weekly.

Shadow & Claw brings together the first two books of the tetralogy in one volume:

The Shadow of the Torturer is the tale of young Severian, an apprentice in the Guild of Torturers on the world called Urth, exiled for committing the ultimate sin of his profession — showing mercy toward his victim.

The Claw of the Conciliator continues the saga of Severian, banished from his home, as he undertakes a mythic quest to discover the awesome power of an ancient relic, and learn the truth about his hidden destiny.

"One of the most ambitious works of speculative fiction in the twentieth century." — The Magazine of Fantasy and Science Fiction

Gene Wolfe (1931-2019) was the Nebula Award-winning author of The Book of the New Sun tetralogy in the Solar Cycle, as well as the World Fantasy Award winners The Shadow of the Torturer and Soldier of Sidon. He was also a prolific writer of distin...

More about Gene Wolfe
Shadow & Claw
Copy and paste the code into your website.
New here? Learn how to read digital books for free