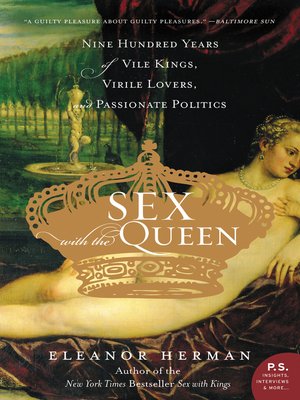 Sex with the Queen

In this follow-up to her bestselling Sex with Kings, Eleanor Herman reveals the truth about what goes on behind the closed door of a queen's boudoir. Impeccably researched, filled with page-turning romance, passion, and scandal, Sex with the Queen explores the scintillating sexual lives of some of our most beloved and infamous female rulers.

She was the queen, living in an opulent palace, wearing lavish gowns and dazzling jewels. She was envied, admired, and revered. She was also miserable, having been forced to marry a foreign prince sight unseen, a royal ogre who was sadistic, foaming at the mouth, physically repulsive, mentally incompetent, or sexually impotent—and in some cases all of the above.

When a queen became sick to death of her husband and took a lover, anything could happen—from disgrace and death to political victory. Some kings imprisoned erring wives for life; other monarchs obligingly named the queen's lover prime minister.

The crucial factor deciding the fate of an unfaithful queen was the love affair's implications in terms of power, money, and factional rivalry. At European courts, it was the politics—not the sex—that caused a royal woman's tragedy—or her ultimate triumph.

The author of Sex with Kings and Sex with the Queen, New York Times bestselling historian Eleanor Herman has hosted episodes for the National Geographic Channel and the History Channel's Lost Worlds. Born in Baltimore, Maryland, she is married and...

More about Eleanor Herman
Sex with the Queen
Copy and paste the code into your website.
New here? Learn how to read digital books for free