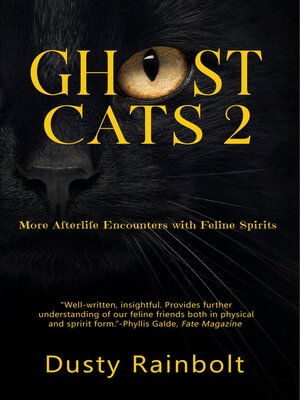 Cats are notorious for being unable to make up their minds. And the phantom felines in Ghost Cats 2: More Afterlife Encounters with Feline Spirits prove that, whether or not they have a heartbeat, cats are always on the wrong side of the door-even the Pearly Gates.

Award-winning journalist Dusty Rainbolt has assembled a collection of eyewitness accounts that provide haunting yet entertaining hints about our pets' afterlife destiny-as well as our own. Rainbolt's narratives of things-that-headbump-in-the-night will have you laughing and crying. You'll feel comfort as well as the occasional chill creep up your spine as you enjoy chapters on:

According to her answering machine Dusty Rainbolt, is an award-winning cat behavior author, veterinary journalist, feline behavior consultant and Fear Free Certified Professional. She has authored thousands of articles and columns, and 14 nonfiction books and novels including the widely acclaimed Kittens for Dummies. She's a past president of the Cat Writers' Association, three-time recipient of the Friskies Writer of the Year Award. Her books, columns and articles have been honored with more than 65 writing awards. In 2008 Rainbolt's first volume about feline phantoms Ghost Cats: Human Encounters with Feline Spirits was awarded the coveted Muse Medallion for Excellence from the Cat Writers' Association. The Muse is the prestigious organization's version of the Pulitzer Prize.

Ghost Cats 2 is the perfect read (or gift) for anyone who loves cats or struggles with the death of a pet, and for anyone who wants to curl up with tales of transcendental tabbies. Order copies of this family-friendly book for yourself or loved ones who have had to say goodbye to their furry friend.