ebook ∣ A Social Anthropological Study of Caste and Class 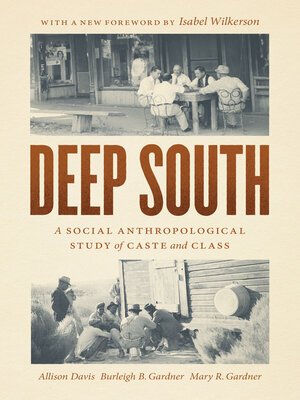 First published in 1941, Deep South is a landmark work of anthropology, documenting in startling and nuanced detail the everyday realities of American racism. Living undercover in Depression-era Mississippi—not revealing their scholarly project or even their association with one another—groundbreaking Black scholar Allison Davis and his White co-authors, Burleigh and Mary Gardner, delivered an unprecedented examination of how race shaped nearly every aspect of twentieth-century life in the United States. Their analysis notably revealed the importance of caste and class to Black and White worldviews, and they anatomized the many ways those views are constructed, solidified, and reinforced.
​
This reissue of the 1965 abridged edition, with a new foreword from Pulitzer Prize winner Isabel Wilkerson—who acknowledges the book's profound importance to her own work—proves that Deep South remains as relevant as ever, a crucial work on the concept of caste and how it continues to inform the myriad varieties of American inequality.