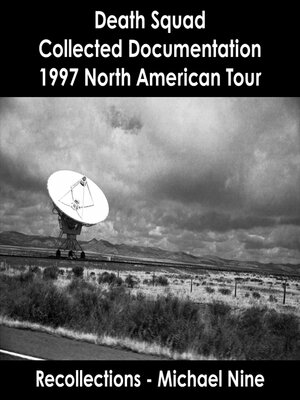 In 1997 Michael Nine set off on his first tour as Death Squad. Beginning in Northern California, where he lived, the tour was an ambitious six-month journey across the United States and into Canada, comprised of sixty shows. Amidst the chaos he managed to extensively document his experiences, taking close to four hundred photos and preserving flyers, posters and handouts.

After decades of touring, Michael looks back at this first venture and shares his recollections; digging into the memories of each show, the people and places encountered along the way. The reader is taken on this journey and plunged into the underground noise scene. The highs, lows and absurdities are amplified.

Michael Nine has been creating and performing audiovisual works for nearly three decades. He has released close to one hundred titles and has been touring extensively since 1997. In the mid nineties, Michael produced two multi-media public access television shows, The Pain Factory and Fuck TV, both of which were recently released on DVD for the first time. In 2001 Michael started to release material and tour under the name MK9. He is now based in Vancouver, Canada. This is his first published book. Michael is currently working on a second book covering the years 1998-2000.

The printed book is available, 200 pages that include: