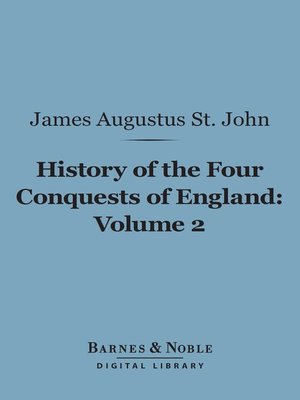 History of the Four Conquests of England, Volume 2

An engrossing look at England in its infancy, when the country was surrounded and disciplined by the influences of four sets of conquerors—the Romans, the Anglo-Saxons, the Danes, and, finally, William the Conqueror. The author argues that braving this adversity served to strengthen the country until it became a political model for other countries. Volume two begins in 1002 and discusses England's conquest by the Danes and closes with the end of William the Conqueror's reign in 1087.

James Augustus St. John (1795–1875) was a British author and voyager. After mastering the classics, as well as six languages, St. John began his career as a journalist, often writing books about his journeys. He is the author of A Journal of a Res...

More about James Augustus St. John
History of the Four Conquests of England, Volume 2
Copy and paste the code into your website.
New here? Learn how to read digital books for free