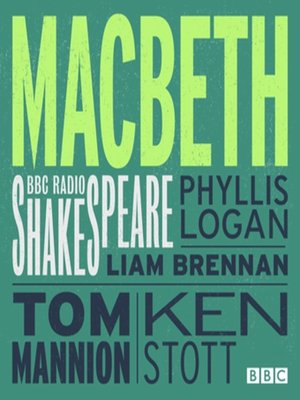 Performing ArtsNonfiction
Ken Stott stars as Macbeth and Phyllis Logan as Lady Macbeth in this BBC Radio 4 production of Shakespeare's notorious 'Scottish play'. Shakespeare's famous tragedy, describing how a lust for power and the prophecy of three witches transform a brave nobleman into a traitor and murderous tyrant, has mesmerised audiences since its first performance over four centuries ago. Macbeth's temptation and descent into evil, his wife's ruthlessness and subsequent madness and the overarching presence of the supernatural are brilliantly evoked in this BBC Radio archive production from 2000, directed by the renowned Richard Eyre. Featuring a distinguished cast and specially-composed music, it brings new depth and excitement to this classic, chilling tale of malevolence and terror. The Classic Radio Theatre range presents notable radio productions of much-loved plays by some of the most renowned playwrights, and starring some of our finest actors.
Performing ArtsNonfiction

Macbeth (BBC Radio Shakespeare)
Copy and paste the code into your website.
New here? Learn how to read digital books for free