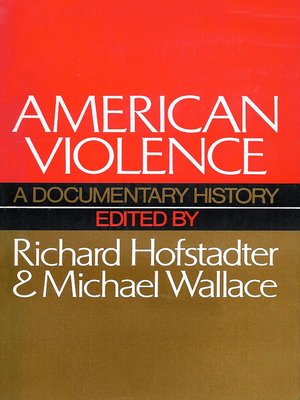 HistorySociologyNonfiction
With eyewitness accounts and contemporary reports—linked together by succinct analytical commentaries—Richard Hofstadter and his young collaborator, Michael Wallace, have created a superb documentary reader that is, in effect, a history of violence in America through four centuries.
Here, as experienced by men and women who lived through them, are not only the familiar, chilling eruptions—Harper's Ferry; the Civil War draft riot in New York; Homestead; Centralia; the Detroit ghetto; the assassinations of Lincoln, Malcolm X, and Robert Kennedy—but also less commonly remembered episodes, such as the New York slave riots of 1712, the doctors' riot of 1788, vigilante terror in Montana, the anti-Chinese riot in Los Angeles in 1871, and the White League coup d'état of 1874 in New Orleans.
In his extensive introduction, Richard Hofstadter shows how, in the face of the record, Americans have had an extraordinary ability to persuade themselves that they are among the best-behaved and the best-regulated of peoples. With more than one hundred entries, the editors have documented and put into perspective the thread of violence in American history whose rediscovery—as Hofstadter suggests—will undoubtedly be one of the most important intellectual legacies of the 1960's. The book clearly demonstrates, even as the reader comes to grips with long-eluded truths, that America's consistent history of violence has not yet breached beyond hope of restoration our long record of basic political stability, that most social reforms in the United States have been brought about without violence.
HistorySociologyNonfiction

More about Richard Hofstadter
American Violence
Copy and paste the code into your website.
New here? Learn how to read digital books for free