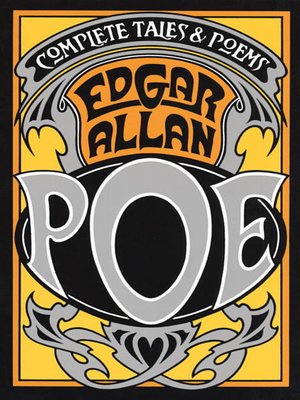 FictionPoetrySuspenseThriller
One of the most original American writers, Edgar Allen Poe shaped the development of both the detectvie story and the science-fiction story. Some of his poems—"The Raven," "The Bells," "Annabel Lee"—remain among the most popular in American literature. Poe's tales of the mmacabre still thrill readers of all ages. Here are familiar favorites like "The Purloined Letter," "The Fall of the House of Usher," and "The Murders in the Rue Morgue," together with less-known masterpieces like "The Imp of the Perverse," "The Narrative of A. Gordon Pym," and "Ligeia," which is now recognised as one of the first science-fiction stories, a total of seventy-three tales in all, plus fifty-three poems and a generous sampling of Poe's essays, criticism and journalistic writings.
FictionPoetrySuspenseThriller

Edgar Allan Poe was a poet, short-story writer, editor and literary critic. He was one of the earliest American practitioners of the short story and is considered the inventor of the detective-fiction genre. Born Edgar Poe in Boston in 1809, he wa...

More about Edgar Allan Poe
Complete Tales & Poems
Copy and paste the code into your website.
New here? Learn how to read digital books for free