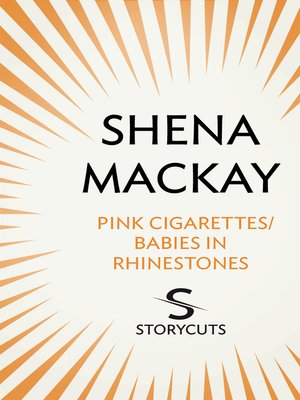 In 'Pink Cigarettes', a schoolboy grows tired of his relationship with an aging poet, who is becoming a greater draw on his time by the day. But when it looks as though his behaviour will break the old man's heart, he must listen closely to his own feelings.

In 'Babies in Rhinestones', the Alfred Ellis School of Fine Art and the Araidne School Elliot School of Dance and Drama stand side by side, much to their proprietors' dismay. The two trade insults daily as they exchange the mail that so often ends up in the wrong letterbox. The tension increases when the owners find that they have adopted the same stray cat.

Part of the Storycuts series, these two stories were previously published in the collection The Atmospheric Railway.

Shena Mackay was born in Edinburgh. She is the author of four previous collections of stories - Babies in Rhinestones, Dreams of Dead Women's Handbags, The Laughing Academy and The World's Smallest Unicorn. Her novels include Dunedin, The Orchard ...

More about Shena Mackay
Pink Cigarettes/Babies in Rhinestones
Copy and paste the code into your website.
New here? Learn how to read digital books for free