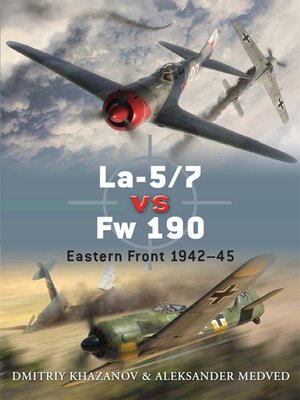 HistoryMilitaryNonfiction
Soviet fighter aviation suffered terribly at the hands of the Jagdwaffe in the first year of the war in the east and, with the arrival of JG 51 and its Fw 190s on the Stalingrad Front in September 1942, things only got worse. However, help was on its way in the form of the La-5. Tougher, faster, and with a greater rate of climb than its predecessors, most were flow by a new generation of better-trained pilots led by combat veterans. These new fighters soon found themselves pitted into action on the Central Sector against the equally new Fw 190As of JG 51. From then on, these two fighters would battle it out in the skies over the Eastern Front. This book tells the complete story of the battles between these two important fighters.
HistoryMilitaryNonfiction

Jim Laurier is a native of New England and lives in New Hampshire. He attended Paier School of Art in Hamden, Connecticut, from 1974–78, and since graduating with Honours, he has been working professionally in the field of Fine Art and Illustratio...

Gareth Hector is a digital artist of international standing as well as an aviation history enthusiast. Gareth completed the battlescene and cover artwork in this title. He lives in Perthshire, UK.

La-5/7 vs Fw 190
Copy and paste the code into your website.
New here? Learn how to read digital books for free