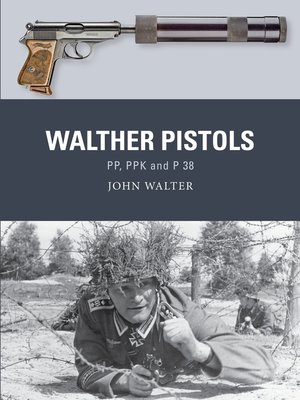 View more libraries...
While the PP and PPK were intended for police work, the Walther P 38 was produced for the Germany military; all three pistols have garnered a formidable international reputation since the 1930s.
The innovative Walther PP (Polizeipistole), a double-action semi-automatic pistol intended for the law-enforcement market, became available in 1929 and went on to arm the police of several European countries in the 1930s. Its smaller cousin the PPK, more readily concealed for undercover work but with reduced magazine capacity, was produced from 1931. Intended to replace the P 08 Luger, the Walther P 38 was issued from 1940 and equipped the armed forces of Germany and other countries during and after World War II, but never entirely replaced the Luger in German service. All three pistols went on to have lengthy and varied service across the world after 1945. Both the PP and the PPK remain in production today, while the P 38 re-emerged as the P1 and equipped West German forces from 1963 until 2004, when it was replaced by the P8. In this study, noted authority John Walter assesses the origins, development, use and legacy of these three high-profile semi-automatic pistols, alongside other Walther variants, such as the tiny .25 ACP Modell 9.