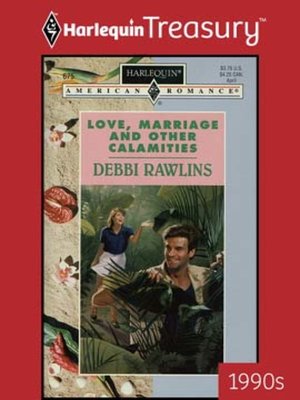 Love, Marriage and Other Calamities

That's how she wound up losing so many jobs. And needing this one badly enough to marry Mike Kramer to get it. Which led to

Maybe signing on as cook hadn't been such a hot idea. Well, actually, it was hot. The kitchen, that is. From the fire. But that was all because of

Mike. Jolie knew why she wanted him--although once they were stranded together in a secluded paradise she got a few new ideas. But what did he want with her? It was definitely a mistake not to marry a stranger...but that wasn't half as bad as

Debbi has written over 50 books for Harlequin since 1994, in several different lines including: Harlequin American, Harlequin Intrigue, Love & Laughter, Duets and Harlequin Blaze. She lives in rural, beautiful Utah with far too many rescued cats a...

More about Debbi Rawlins
Love, Marriage and Other Calamities
Copy and paste the code into your website.
New here? Learn how to read digital books for free