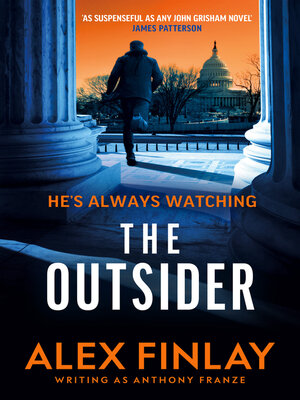 View more libraries...
'The Outsider is as authentic and suspenseful as any John Grisham novel – and I like Grisham a lot' JAMES PATTERSON
He's always watching...
Grayson Hernandez isn't happy. He's drowning in student debt from law school and the only job he's got is as a messenger. Worst of all, it's for the Supreme Court, where Gray is forced to watch the best and the brightest – the elite group of lawyers who serve as the justices' law clerks – from the outside.
When Gray intervenes in a violent mugging, he makes a powerful friend: the victim was the Chief Justice of the United States. Gray becomes the newest law clerk at the Supreme Court. It's another world, with highbrow debates in the inner sanctum of the nation's highest court and upscale dinners with his new friends.
But just as Gray adapts to his new life, the FBI approaches him with unsettling news. There's a killer embedded in the Supreme Court, and they want Gray to be their eyes and ears. But what Gray doesn't know is that the FBI will soon set its sights on him. And when they do, Gray must navigate a world cloaked in secrecy, to uncover the truth before the murderer strikes again.
Praise for The Outsider:
'Crafty and clever! Franze's insider knowledge of the Supreme Court sets this twisty legal thriller apart. The sympathetic plight of the outsider hero, Grayson Hernandez, will keep you glued to the pages; the explosive plot will leave you breathless' LISA GARDNER
'With an insider's eye for detail, Franze delivers supreme wickedness in a world few of us will ever be privy to. Franze is taking the legal thriller to new heights' LINWOOD BARCLAY
'It's like a mix of John Grisham and Scott Turow alongside the inner workings of the court system. Toss it all together and the end result is this winning novel' WASHINGTON POST
'Franze has earned a seat at the table of legal thriller masters, and his latest book is compelling proof of that' STRAND MAGAZINE
'The Outsider is a stellar look inside the Supreme Court, and a killer thriller to boot. Franze has cemented himself as a top-notch legal thriller writer. If you like Grisham, you will love this book' J.T. ELLISON
'Franze has fashioned a potboiler of a tale that channels John Grisham, David Baldacci and Thomas Harris all at the same time... The Outsider moves at a blistering clip, never letting up or letting us down for a moment' PROVIDENCE JOURNAL
'Franze brings that rare combination of great storytelling and insider knowledge that will keep readers turning pages well into the night' JAMES GRIPPANDO
'In The Outsider, Franze pulls off a remarkable feat: an adrenaline-fueled thriller that simultaneously illuminates Supreme Court history, precedent, and procedure. It's a must-read for anyone who savors getting lost in a great book' ABOVE THE LAW
'The mind of this author is so quick that he weaves a story so exciting it becomes a one-day read automatically' SUSPENSE MAGAZINE
'Franze is being hailed as the next John Grisham – and for good reason. The Outsider is a high-wire act of political intrigue and mystery, atmospheric, and a wild narrative you don't want to stop reading' THE PRESS REPUBLICAN (NY)