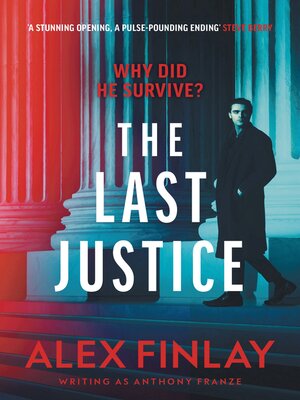 View more libraries...
Why did he survive?
An assassin guns down the justices as they are hearing a case in the U.S. Supreme Court. Solicitor General Jefferson McKenna, the government's top lawyer, is appointed to the multi agency commission investigating the murders. As Congress draws battle lines over who will replace the slain justices, the commission follows clue after clue, each one pointing to an unlikely suspect: McKenna himself.
In a desperate bid to prove his innocence, McKenna must track down a disgraced law clerk with ties to hidden Saudi assets. But his search just reveals even more corruption and the people with answers keep turning up dead.
Now, McKenna will discover just how much danger he's in, and how far his enemy will go to conceal the truth...
Praise for The Last Justice:
'Watch out, John Grisham – Franze has arrived, and he's damn good!' GAYLE LYNDS
'A stunning opening, an action-packed, intriguing middle, and a pulse-pounding ending. Who could ask for more from a thriller. Welcome Anthony Franze – a great new voice has entered the genre' STEVE BERRY
'An absorbing debut novel full of galloping plot twists, with that special touch: emotional truth' PERRI O'SHAUGHNESSY
'Runs at 100 miles an hour and [...] full of 'did not see that coming' moments and with an ending that will surprise you. The Last Justice is wonderful' FRESH FICTION