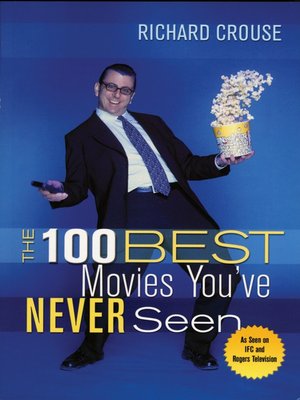 Richard Crouse, film critic and host of television's award-winning Reel to Real takes you on a journey through 70 years of cinema history, choosing his favorite overlooked films. From the sublime — Monsoon Wedding — to the ridiculous — Eegah! The Name Written in Blood — The 100 Best Movies You've Never Seen covers a wide spectrum of films from the 1930s through to present day. Complementing the reviews are detailed descriptions of the movie's plots, trivia, and interviews with the actors and filmmakers. Featured interviews include Bill Wyman discussing a little known Rolling Stones documentary, schlockmeister Lloyd Kaufman detailing the history of his most famous character, The Toxic Avenger, reclusive writer/director Hampton Fancher on his film The Minus Man and B-movie hero Bruce Campbell on playing Elvis Presley in Bubba Ho-Tep. Crouse also includes sidebars of top 10 lists, including favorite legal disclaimers ("All characters portrayed in this film are entirely fictitious and bare resemblance to anyone living or dead, except for one") and favorite quotes ("I once thought I had mono for an entire year. Turns out I was just really bored.") If you're a fan of off-beat cinema, or just looking for something different to rent the next time you go to the video store, The 100 Best Movies You've Never Seen is the perfect book for you.