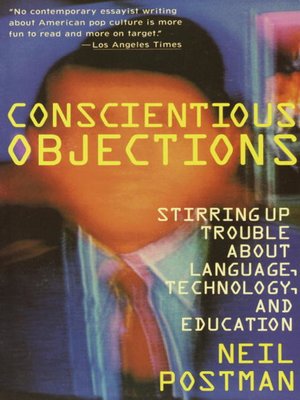 Stirring Up Trouble About Language, Technology and Education

EducationEssaysSociologyNonfiction
In a series of feisty and ultimately hopeful essays, one of America's sharpest social critics casts a shrewd eye over contemporary culture to reveal the worst — and the best — of our habits of discourse, tendencies in education, and obsessions with technological novelty. Readers will find themselves rethinking many of their bedrock assumptions: Should education transmit culture or defend us against it? Is technological innovation progress or a peculiarly American addiction? When everyone watches the same television programs — and television producers don't discriminate between the audiences for Sesame Street and Dynasty — is childhood anything more than a sentimental concept? Writing in the traditions of Orwell and H.L. Mencken, Neil Postman sends shock waves of wit and critical intelligence through the cultural wasteland.
EducationEssaysSociologyNonfiction

Neil Postman was a University Professor, the Paulette Goddard Chair of Media Ecology, and the chair of the Department of Media, Culture, and Communication, all at New York University. Among his 20 books are studies of childhood (The Disappearance ...

More about Neil Postman
Conscientious Objections
Copy and paste the code into your website.
New here? Learn how to read digital books for free