Maps of Meaning--The Architecture of Belief by Jordan B. Peterson--Summary by Fireside Reads 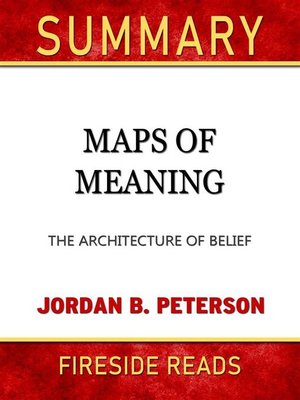 View more libraries...
Learn the Invaluable Lessons from Maps of Meaning: The Architecture of Belief by Jordan B. Peterson and Apply it into Your Life Without Missing Out!


What's it worth to you to have just ONE good idea applied to your life?

In many cases, it may mean expanded paychecks, better vitality, and magical relationships.

Here's an Introduction of What You're About to Discover in this Premium Summary of Maps of Meaning: The Architecture of Belief by Jordan B. Peterson :

The book, Maps of Meaning: Architecture of Belief, was a product of many long years of intensive labor. Thirteen years in the making was no easy feat. In order to write this book, extensive research was required in order to explain the meaning of history. The Cold War is a phenomena which Peterson cannot fully comprehend, thus, he conducted research to fully understand the motive of those who supported this cause. The author pursued a deeper understanding of how the social and political intertwined with each other that led to the Cold War and the rise of totalitarianism in the world. Peterson pursued psychology due to the influence of Carl Jung. Juggling his thesis with his desire to have a tenure at Harvard, he started to work on the book and drew from the work that he had written in his classes as assistant professor of psychology at Harvard University. The book was inspired by Jung's perspective on collective unconsciousness and evolutionary psychology. The book is a melting pot of different perspective ranging from Dante Alighieri, Hannah Arendt, Fyodor Dostoyevsky, Northrop Frye, Johann Wolfgang von Goethe, the Brothers Grimm, Stephen Hawking, Laozi, Konrad Lorenz, Alexander Luria, John Milton, Friedrich Nietzsche, Jean Piaget, B. F. Skinner, Aleksandr Solzhenitsyn, Voltaire, and Ludwig Wittgenstein including the theories of religion and God.

Scroll Up and Buy Now!
100% Guaranteed You'll Find Thousands of Dollars Worth of Ideas in This Book or Your Money Back

Faster You Order - Faster You'll Have it in Your Hands!

*Please note: This is a summary and workbook meant to supplement and not replace the original book.