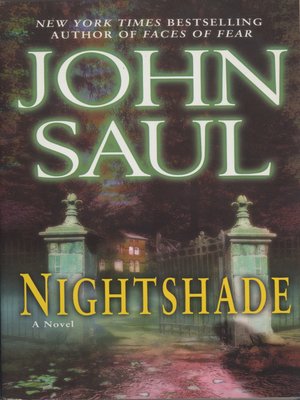 Fifteen-year-old Matthew Moore seems to have a charmed life . . . until a mysterious fire forces his grandmother to move in with his family. The elderly woman insists on recreating the bedroom of Cynthia, her favored child who died tragically more than a decade ago. Soon Matt's life insidiously begins to change. At night he finds himself haunted by nightmares of unimaginable terror. In the morning the smell of Cynthia's perfume seems to linger in his room. While his grandmother drives a wedge between his once devoted parents, Matt transforms from a gregarious teenager to a hostile loner. Then a shocking tragedy shatters the family beyond repair--as a horrific shadow from the past takes on an implacable life of its own, clawing toward Matt with ferocious hunger. . . .

JOHN SAUL's first novel, Suffer the Children, published in 1977, was an immediate million-copy bestseller. He has since written twenty-two successive bestselling novels of suspense, including Nightshade, The Right Hand of Evil, The Presence, Black...

More about John Saul
Nightshade
Copy and paste the code into your website.
New here? Learn how to read digital books for free