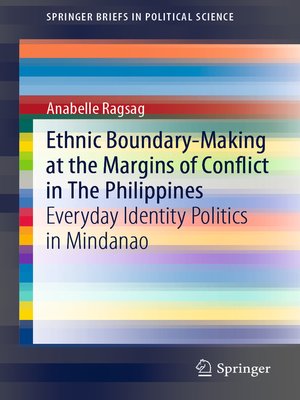 Ethnic Boundary-Making at the Margins of Conflict in the Philippines

This book makes a significant interdisciplinary contribution to existing scholarship on ethnicity, conflict, nation-making, colonial history and religious minorities in the Philippines, which has been confronted with innumerable issues relating to their ethnic and religious minority populations. Using Sarangani Bay as a research site, the book zones in on the lives of the Muslim Sinamas and the Christianized indigenous B'laans as they navigate the effects of the ongoing turmoil in the Bangsamoro region in Muslim Mindanao—a multi-faceted conflict involving numerous armed groups, as well as clans, criminal gangs and political elites. This work considers the factors affecting the Muslim Moro people, who have long been struggling for their right to self-determination. The conflict in the Moro areas has evolved over the past five decades from an ethnonationalist struggle between an aggrieved minority and a thorny issue for the central government: a highly fragmented conflict with multiple overlapping causes of violence. The book provides a framework for understanding the ethnic separatism in the case of the southern part of the country, framed by the concept of ethnic boundaries. Providing an excellent blend of theory and empirical evidence, the author confronts how ethno-religious divisions adversely impact the quality of life and unpacks how these divisions challenge multiculturalist policies. Weaving together multiple branches of the social sciences, this book is of interest to policymakers, researchers and students interested in international relations and political science, Asian studies, ethnic studies, Philippines' history, sociology and anthropology.

Ethnic Boundary-Making at the Margins of Conflict in the Philippines
Copy and paste the code into your website.
New here? Learn how to read digital books for free