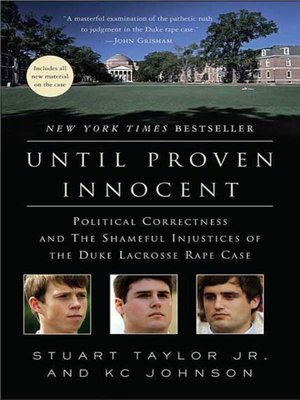 What began that night shocked Duke University and Durham, North Carolina.
And it continues to captivate the nation: the Duke lacrosse team members' alleged rape of an African-American stripper and the unraveling of the case against them.
In this ever-deepening American tragedy, Stuart Taylor Jr. and KC Johnson argue, law enforcement, a campaigning prosecutor, biased journalists, and left-leaning academics repeatedly refused to pursue the truth while scapegoats were made of these young men, recklessly tarnishing their lives.
The story harbors multiple dramas, including the actions of a DA running for office; the inappropriate charges that should have been apparent to academics at Duke many months ago; the local and national media, who were so slow to take account of the publicly available evidence; and the appalling reactions of law enforcement, academia, and many black leaders.
Until Proven Innocent is the only book that covers all five aspects of the case (personal, legal, academic, political, and media) in a comprehensive fashion. Based on interviews with key members of the defense team, many of the unindicted lacrosse players, and Duke officials, it is also the only book to include interviews with all three of the defendants, their families, and their legal teams.
Taylor and Johnson's coverage of the Duke case was the earliest, most honest, and most comprehensive in the country, and here they take the idiocies and dishonesty of right- and left-wingers alike head on, shedding new light on the dangers of rogue prosecutors and police and a cultural tendency toward media-fueled travesties of justice. The context of the Duke case has vast import and contains likable heroes, unfortunate victims, and memorable villains—and in its full telling, it is captivating nonfiction with broad political, racial, and cultural relevance to our times.

Stuart Taylor Jr. is a columnist for National Journal and contributing editor for Newsweek, writing about legal, policy, and political issues. A Harvard Law graduate, he covered legal affairs and the Supreme Court during eight years at The New Yor...

More about Stuart Taylor, Jr.
Until Proven Innocent
Copy and paste the code into your website.
New here? Learn how to read digital books for free