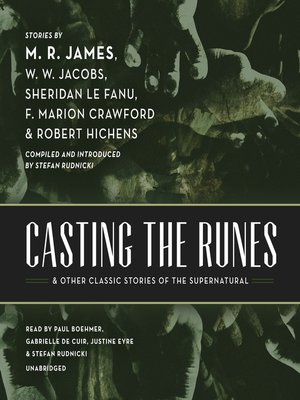 Casting the Runes, and Other Classic Stories of the Supernatural

English author Montague Rhodes James (1862–1936) is considered by many aficionados the unquestioned master of the modern ghost story, and several of his tales have served as source material for multiple creepy film versions. He broke new ground by abandoning many of the conventions of gothic mysteries, and substituting contemporary settings, situations, and characters. Nevertheless, as a Cambridge medieval scholar, James was steeped in the esoteric lore of the Middle Ages, and he applied that scholarship brilliantly to his stories.

The four stories in this compilation not by James are meant to serve as prime illustrations of the best work of a few of his contemporaries and immediate antecedents.

Francis Marion Crawford (1854–1909) was an American writer famed for his classic weird and fantastic stories.

M. R. James (1862–1936) was an English medieval scholar and provost of King's College, Cambridge and Eton College. He is best remembered for his ghost stories, which redefined the genre. He abandoned the many gothic clichés of his predecessors and...

Gabrielle de Cuir, award-winning narration, has narrated over two hundred titles and specializes in fantasy, humor, and titles requiring extensive foreign language and accent skills. She was a cowinner of the Audie Award for best narration in 2011...

W. W. Jacobs (1863–1943) is considered a master of the macabre tale, mostly for his work The Monkey's Paw, a classic horror short story. He was a master at weaving terror and suspense into scenes of everyday life. Nevertheless, his popularity in h...

Justine Eyre is a classically trained actress who has narrated many audiobooks, earning the prestigious Audie Award for best narration and numerous Earphones Awards. She is multilingual and known for her great facility with accents. She has appear...

Casting the Runes, and Other Classic Stories of the Supernatural
Copy and paste the code into your website.
New here? Learn how to read digital books for free