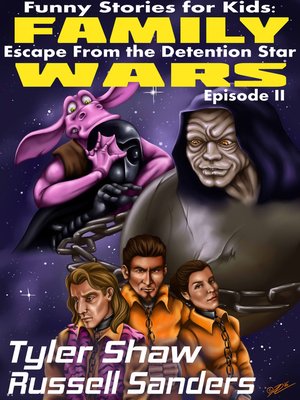 The long awaited riveting and hilariously ridiculous sequel to Family Wars Episode I: The Forced Dinner, is released at last by the famed Dweezel and Pallie!

Having betrayed his family to the evil Emperor, Dark Zader must find a way to rescue his family of rebel scum from the largest and most secure prison in the galaxy, the Detention Star. Dark Zader is trying to lead a double life, secretly keeping to the light side of the fizz while working for his former master, the vile Emperor Eugene and his Cosmic Empire.

Meanwhile John Solar, Nuke Landhopper, Princess Neia, and the rest of the gang deal with the brutal realities of prison life, such as their impending execution, gangs, and toilets without privacy. Along the way they'll make a new friend, Stardoe. (Dweezel and Pallie decline to comment on any similarities to the female Starbuck of the re-imagined Battlestar Galactica)

This is Family Wars, Episode II, Escape from the Detention Star

Funny Stories for Kids
Copy and paste the code into your website.
New here? Learn how to read digital books for free