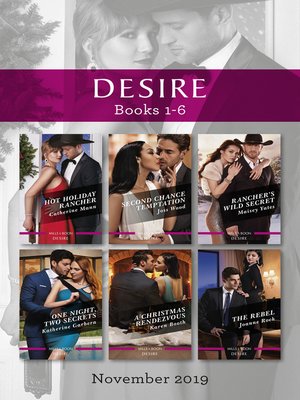 Rancher Jesse Stevens wants to get married, but Texas heiress Esme Perry is not the woman the matchmaker promised. And when they're stranded together during a flash flood – over Christmas – will passion sweep them into something more than a holiday fling?

Years ago, Tanna left Boston businessman Levi at the altar. Now she's back to make amends and move on with her life. Until Levi traps her into staying – and shows her the life she could have had. But their complicated past could destroy their second chance...

Holden McCall came to Gold Valley with one goal: seduce his enemy's innocent engaged daughter, Emerson Maxfield. But the tempting cowboy didn't plan for good girl Emerson to risk everything, including her future, to indulge the desire neither can resist...

Heiress Scarlet O'Malley thinks she had a one-night stand with a certain Houston billionaire, but learns it was his twin, Alejandro Velasquez! The switch isn't her only shock. With a baby on the way, can their night of passion last a lifetime?

After a chance encounter leads to a one-night stand, lawyers Isabel Blackwell and Jeremy Sharp find themselves reunited on opposite sides of a high-stakes case at Christmas. As their forbidden attraction reignites, her past and a surprise revelation threaten everything...

Lily Carrington is doubly off-limits to Marcus Salazar: not only is she engaged to another man when she meets the media mogul, but she's also a spy for his business-rival brother. Can Marcus tame his desire for her – and will he want to?