Radiation Source Use and Replacement 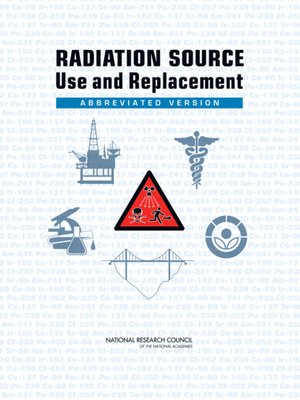 In the United States there are several thousand devices containing high-activity radiation sources licensed for use in areas ranging from medical uses such as cancer therapy to safety uses such as testing of structures and industrial equipment. Those radiation sources are licensed by the U.S. Nuclear Regulatory Commission and state agencies. Concerns have been raised about the safety and security of the radiation sources, particularly amid fears that they could be used to create dirty bombs, or radiological dispersal device (RDD). In response to a request from Congress, the U.S. Nuclear Regulatory Commission asked the National Research Council to conduct a study to review the uses of high-risk radiation sources and the feasibility of replacing them with lower risk alternatives. The study concludes that the U.S. government should consider factors such as potential economic consequences of misuse of the radiation sources into its assessments of risk. Although the committee found that replacements of most sources are possible, it is not economically feasible in some cases. The committee recommends that the U.S. government take steps to in the near term to replace radioactive cesium chloride radiation sources, a potential "dirty bomb" ingredient used in some medical and research equipment, with lower-risk alternatives. The committee further recommends that longer term efforts be undertaken to replace other sources. The book presents a number of options for making those replacements.