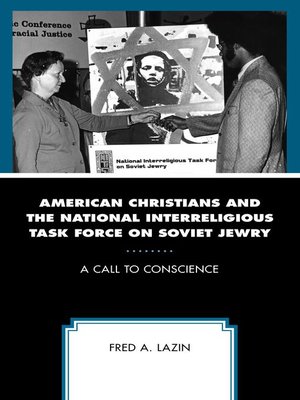 A Call to Conscience

by Fred A. Lazin

HistoryPoliticsNonfiction
This study provides the first in-depth examination of the role and influence of American Christians in the advocacy efforts for Soviet Jewry during the 1970s and 1980s. It explores how American Catholics and Protestants engaged with American Jews to campaign for the emigration of Soviet Jews and to end the cultural and religious discrimination against them. The book presents a case study of the National Interreligious Task Force on Soviet Jewry from its inception to its closure in order to better understand the complexities of the politics of interreligious affairs during this period. At the heart of the story is Sister Ann Gillen of the Society of the Holy Child Jesus, who directed the Chicago-based task force under the auspices of the American Jewish Committee. The author provides a comprehensive look at task force activities, programs, and relationships, notes its ties to the civil rights movement, and offers in-depth analysis of its participation and role in the global arena. American political, religious, and ethnic leaders play prominent roles in this story, along with the national media, and countless religious and community groups across the United States. The relationship between American Jews and Israel is a factor of fundamental significance as well and plays a critical role in the development of the Task Force. This close-up analysis of the task force is based on extensive archival research and interviews with key players in its history.
HistoryPoliticsNonfiction

Fred A. Lazin is professor emeritus at Ben Gurion University of the Negev.

More about Fred A. Lazin
American Christians and the National Interreligious Task Force on Soviet Jewry
Copy and paste the code into your website.
New here? Learn how to read digital books for free