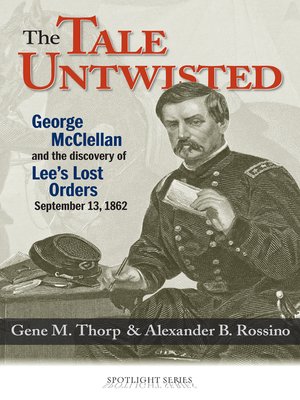 George McClellan and the Discovery of Lee's Lost Orders, September 13, 1862

HistoryReferenceMilitaryNonfiction
The discovery of Robert E. Lee’s Special Orders no. 191 outside of Frederick, Maryland on September 13, 1862 is one of the most important and hotly disputed events of the American Civil War. For more than 150 years historians have debated if George McClellan, commander of the Union Army of the Potomac, dawdled upon receiving a copy of the orders before warily advancing to challenge Lee’s forces at the Battle of South Mountain.
In this new digital essay, the first in the Spotlight Series to be published by Savas Beatie, authors Gene Thorp and Alexander Rossino document exhaustively how ‘Little Mac’ moved with uncharacteristic energy to counter the Confederate threat and take advantage of Lee’s divided forces, striking a blow in the process that wrecked Lee’s plans and sent his army reeling back toward Virginia.
The essay is a beautifully woven tour de force of primary research that proposes to put a final word on the debate over the fate and impact of the Lost Orders on the history of the 1862 Maryland Campaign.
HistoryReferenceMilitaryNonfiction

The Tale Untwisted
Copy and paste the code into your website.
New here? Learn how to read digital books for free