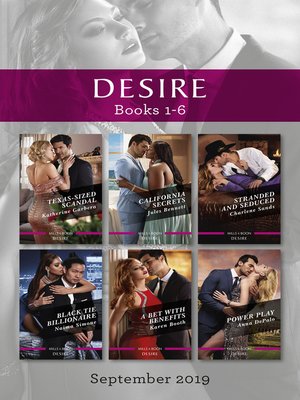 Houston philanthropist Melinda Perry always played by the rules. Getting pregnant by a mob boss's son was certainly never in the playbook–until now. Can they contain the fallout...and maybe even turn their forbidden affair into forever?

Ethan Michaels is on a mission to reclaim the resort his mother built. Then he's sidetracked by sexy Harper Williams – only to find out she's his enemy's daughter. All's fair in love and war...until Harper's next explosive secret shakes Ethan to his core.

To keep her distance from ex-fling Risk Boone, April Adams pretends to be engaged. But when a storm strands them together and the rich rancher has an accident resulting in amnesia, he suddenly thinks he's the fiancé! Especially when passion overtakes them...

CEO Gideon Knight demands that Shay Neal be his fake fiancée to avenge his family. Too bad he doesn't realise they already shared an anonymous night during the Chicago blackout! But even through the deception, the truth of their chemistry cannot be denied.

A Bet With Benefits - Karen Booth

Entrepreneur Mindy Eden scoffs when her sisters bet she can't spend time with her real estate mogul ex without succumbing to temptation. But it soon becomes crystal clear that second chances are in the cards. Will Mindy risk her business for one more shot at pleasure?

Hockey legend and sports industry tycoon Jordan Serenghetti needs his injury healed-and fast. Too bad he clashes with his physical therapist over a kiss they once shared-and Jordan forgot! As passions flare, will she be ready for more revelations from his player past?