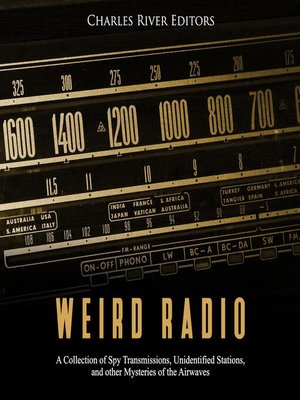 A Collection of Spy Transmissions, Unidentified Stations, and other Mysteries of the Airwaves

For more than a century, radio has been a part of people's lives. No one alive today remembers a time when it hadn't always been there as a familiar, reliable source of information and entertainment. Today, it seems a bit mundane, overtaken by the Internet and satellite television. Even in the 1980s, the development of cable television (50 channels instead of five) and the start of MTV made radio seem quaint, and as many once claimed, "Radio is dead."

It wasn't, of course. Radio is still popular today, with as many stations as ever, and it remains a part of the world that is taken for granted. While not dead, its familiarity has made it seem a bit mundane, but people shouldn't think of it that way. In fact, the airwaves have always been a place of mystery, a battleground of competing ideologies, and a source of anonymous voices. Radio has been used to support war efforts, topple governments, communicate secretly, and even attempt to communicate with the dead.

Weird Radio: A Collection of Spy Transmissions, Unidentified Stations, and other Mysteries of the Airwaves includes strange stories that will make this familiar medium seem a bit less familiar and far more interesting. Along with pictures of important people, places, and events, you will learn about some of the world's strangest radio stories like never before.

Weird Radio
Copy and paste the code into your website.
New here? Learn how to read digital books for free