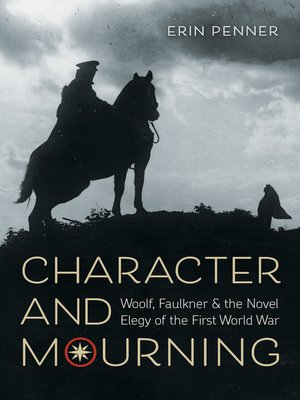 Woolf, Faulkner, and the Novel Elegy of the First World War

In response to the devastating trauma of World War I, British and American authors wrote about grief. The need to articulate loss inspired moving novels by Virginia Woolf and William Faulkner. Woolf criticized the role of Britain in the "war to end all wars," and Faulkner recognized in postwar France a devastation of land and people he found familiar from his life in a Mississippi still recovering from the American Civil War. In Character and Mourning, Erin Penner shows how these two modernist novelists took on the challenge of rewriting the literature of mourning for a new and difficult era.

Faulkner and Woolf address the massive war losses from the perspective of the noncombatant, thus reimagining modern mourning. By refusing to let war poets dominate the larger cultural portrait of the postwar period, these novelists negotiated a relationship between soldiers and civilians—a relationship that was crucial once the war had ended. Highlighting their sustained attention to elegiac reinvention over the course of their writing careers—from Jacob's Room to The Waves, from The Sound and the Fury to Go Down, Moses—Penner moves beyond biographical and stylistic differences to recognize Faulkner and Woolf's shared role in reshaping elegiac literature in the period following the First World War.

Character and Mourning
Copy and paste the code into your website.
New here? Learn how to read digital books for free