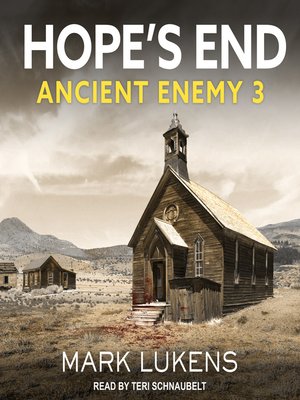 FictionHorrorLiteratureThriller
In 1891, in the badlands of northern Arizona, Jed Cartwright, a bounty hunter and U.S. Marshal, transports a dangerous prisoner back to the town of Smith Junction. As they travel through the woods, they are attacked by what they believe are skinwalkers. As Jed flees the woods, he finds a house where a family has been slaughtered. The only survivor is an eight-year-old Navajo boy, a boy traumatized by the horrors he has seen. As Jed and the Navajo boy make their way north to Smith Junction, a sudden sandstorm diverts them to the small town of Hope's End. They take refuge from the storm in the saloon with some of the townspeople. But hours later, when the storm is over, they discover what has happened to the rest of the people in Hope's End . . . and the terror is only beginning, everything leading up to a shocking twist at the end.
FictionHorrorLiteratureThriller

Mark Lukens has had several stories published and four screenplays optioned by producers in Hollywood. He is also the bestselling author of Ancient Enemy, Descendants of Magic, The Summoning, Night Terrors, Ghost Town, and A Dark Collection: 12 Sc...

More about Mark Lukens
Hope's End--Ancient Enemy 3
Copy and paste the code into your website.
New here? Learn how to read digital books for free