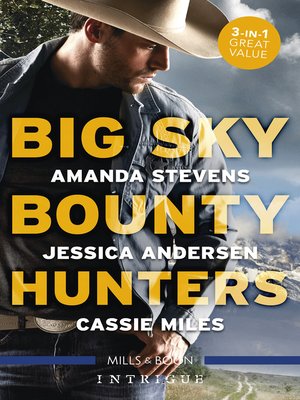 When investigative reporter Kaitlyn Wilson's nose for the news lured her into trouble, Bounty Hunter Aiden Campbell found himself rescuing her. And when her fragmented memories recalled a grisly crime carried out by the very militia members he hunted, his protective instincts kicked into high gear. Spiriting Kaitlyn away to a safe house, Aiden soon realised that it wasn't just their lives in danger – but also their hearts!

Tough. Tenacious. True blue. Secret Service agent Isabella Gray knew those traits described bounty hunter Jacob Powell to a T. When the secretary of defence's family was ambushed on her watch, she knew she needed the sexy ex-Special Forces soldier's help. But their rescue mission led to a harrowing plane crash, and the discovery of pent-up emotions. Could Jacob and Isabella's red-hot passion for each other chase away the chill of terror?

As one of Big Sky's boldest bounty hunters, Trevor Blackhaw lived by his own rules – until the iron hearted warrior was shaken to the core by the fierce protectiveness that Sierra Collins stirred in him. After a sinister manoeuvre allowed the enemy to gain the upper hand, Trevor stood guard over the tempestuous beauty, and vowed to employ all his specialised skills to capture his prey and rescue the lady he loved!