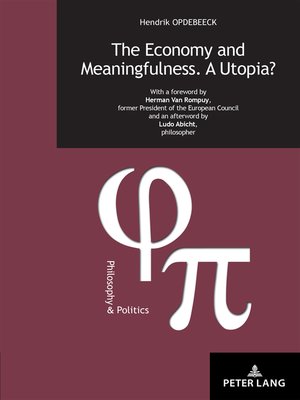 The Economy and Meaningfulness. a Utopia?

With a foreword by Herman Van Rompuy, former President of the European Council and an afterword by Ludo Abicht, philosopher · Philosophie Et Politique / Philosophy and Politics

It is utopian to represent the economy as a place in which human happiness is as paramount as profit. That is the opinion of many who might pick up this book. This truism, analogous to the argument that Gross National Happiness is utopian, is, however, confronted by the actual situation of our economy today. Our globalized society, with its Gross National Product, turns out to be a dystopia. Our globe has indeed become a place where it is no longer that pleasant to live. From burned-out people at the workplace, via the gap between the northern and the southern hemisphere, to our threatened environment: there is not much left of the utopia of the free market. The aim of at least the last fifty years, since the Club of Rome, of transforming it into a sustainable economy is failing. In this book, we find a plea for economic practices as elaborated in the Social Economy, the Purpose Economy and the Economy of Communion. Time and again, these are manifestations of an economic transition which, to a greater or lesser degree, no longer focuses exclusively on principles such as scarcity, individualism or utility. Responsibility, the interpersonal and authenticity are at least as central. Each time, they are concrete challenges that are the pertinent responses to the tension between utopia and dystopia. It is not a matter of fanatically reversing all economic activity in our globalized society in the direction of an economy of meaningfulness. But the unmistakably obvious challenge for our economy that the alternatives represent has something of an appealing urgency.

Hendrik Opdebeeck teaches philosophy in the faculties of Arts, Social Sciences, and Business and Economics at the University of Antwerp, Belgium. He studied economics and philosophy at the universities of Ghent and Leuven. He is chairman of the SP...

More about Hendrik Opdebeeck
The Economy and Meaningfulness. a Utopia?
Copy and paste the code into your website.
New here? Learn how to read digital books for free