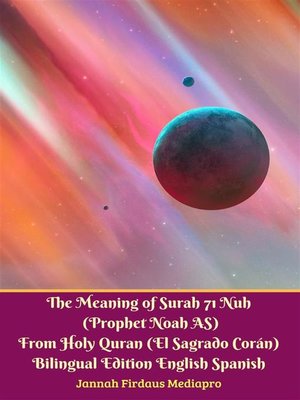 Foreign Language StudyNew AgeReligion & SpiritualityNonfiction
Surah 71 Nuḥ (Prophet Noah AS) is the seventy-first sura of The Holy Quran with 28 ayat. It is about the Islamic prophet Noah (Nuḥ) and his complaint about his people rejecting all warning God gave them through Prophet Noah AS (Nuh).

In Nuh, the seventy-first surah, the Quran refers to Nuh's prophethood in snippets. Nuh is a messenger of God. When Nuh realizes the messages are not accepted by the community, he supplicated to God. God planned to flood the community of Nuh at a specified time. God commanded Nuh to warn the people of the flood. God brings forth the water from the skies to prove Nuh's message to be accurate. In the Quran, the flood is a symbolization of the mercy of God to the believers. Allah SWT (God) gives the world a new beginning.

The disbelievers disbelieved God's message and messenger Nuh so they were drowned. Because his people are unable to grasp the idea of the existence of one God, the lives of Prophet Muhammad SAW and Prophet Nuh AS (Noah) are parallel to each other for the time of the revelation of this surah. The surah was used to increase the faith of the believers; it shows that Prophet Nuh AS (Noah) before Prophet Muhammad SAW had difficulties in dealing with the disbelievers of his time.

Ayat 1–4 discusses the message Nuh received from God to share with his community, to serve God.

In Ayat 5–20, Nuh informs God that his people are not accepting his message. Nuh tries to make clear to the people that all of the Earth, the sun, the moon are signs of God's existence.

In Ayat 21–24, Nuh asks God to rid the world of the evildoers because they refused to abandon their idols and encourage others to do the same.

In Ayat 25–28, the disbelievers were all drowned and sent to Hell (as a result of the flood). Nuh asks God to forgive the believers and to destroy the disbelievers because their faith will lead many astray.

The surah is entirely Meccan meaning it was revealed while Muhammad was trying to create a Muslim community in Mecca. According to the Tanzil version, it was the seventy-first surah revealed. It was revealed after the sixteenth surah, An-Nahl ("The Bee") and before the fourteenth surah Ibrahim ("Abraham"). According to Noldeke's version, Nuḥ was the fifty-third surah to be revealed. It was revealed after the thirty-seventh surah Saaffaat ("Those Who Set The Ranks"), and before the seventy-sixth surah, Insaan or Dahr ("Man" or "Time"). Main themes of Surah Nuh's include: belief in One God (Pure Monotheism), signs of God (the Earth, Sun, Moon), and punishment of denying Allah's message.
Foreign Language StudyNew AgeReligion & SpiritualityNonfiction

The Meaning of Surah 71 Nuh (Prophet Noah AS) From Holy Quran (El Sagrado Coran) Bilingual Edition English Spanish
Copy and paste the code into your website.
New here? Learn how to read digital books for free