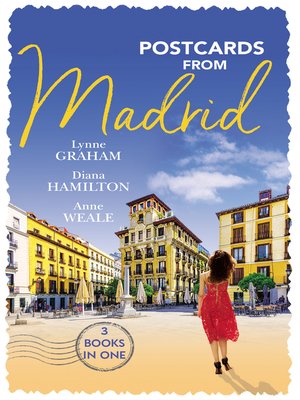 Antonio Rocha saw Sophie Cunningham as a tramp - she was raising his orphaned baby niece in a trailer, after all! However, Antonio didn't appreciate that though she might not be a lady, Sophie had plenty of love to give. He soon found himself attracted to her, and he knew how to indulge this passion: a marriage arrangement on his terms...

Unfairly fired and thrown out into the street, Izzy Makepeace's only option was to take a housekeeping job with powerful Spanish billionaire Cayo Garcia's uncle. Cayo thought he'd seen Izzy's type before: out for all she can get. But then her innocence surprised him. Cayo was used to having his demands met - and Izzy's position as housekeeper put her directly at his beck and call!

The Man From Madrid - Anne Weale

Cally hoped for peace and quiet when she escaped to beautiful rural Spain, but the arrival of mysterious millionaire Nicolás Llorca changed all that! He'd made it clear he wanted Cally - and that he wasn't looking for long-term commitment.

The smouldering good looks and charm of the man from Madrid proved hard to resist. But Cally wasn't interested in a brief affair. Determined to keep her distance, Cally found her resolve was tested when Nicolás made her an offer impossible to refuse...

Postcards From Madrid / Married by Arrangement / The Spaniard's Virgin Housekeeper / The Man From Madrid
Copy and paste the code into your website.
New here? Learn how to read digital books for free