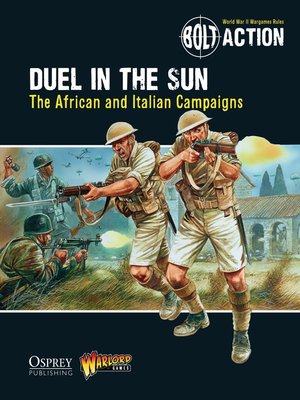 Duel in the Sun

GamesHistoryMilitaryNonfiction
With Duel in the Sun, players can take command of the doughty Desert Rats of Montgomery's 8th Army, the fast-moving and hard-hitting raiders of the Long Range Desert Army (LRDG), or Rommel's mighty Afrika Korps, to recreate some of the most iconic battles of World War II – Operations Compass, Crusader and Torch, Tobruk, and Alamein, amongst others.
Offering scenarios, special rules and new troop types, this Theatre Book for Bolt Action also takes players across the Mediterranean from North Africa, where they can follow the Italian Campaign from the invasion of Sicily, through the battles for Anzio and Cassino, to the final assaults on the Gothic Line.
GamesHistoryMilitaryNonfiction

Warlord Games is one of the world's leading producers of wargaming miniatures, as well as the publisher of the successful Black Powder and Hail Caesar rule sets. Their Bolt Action range of 28mm World War II miniatures is the most extensive on the ...

More about Warlord Games
Duel in the Sun
Copy and paste the code into your website.
New here? Learn how to read digital books for free