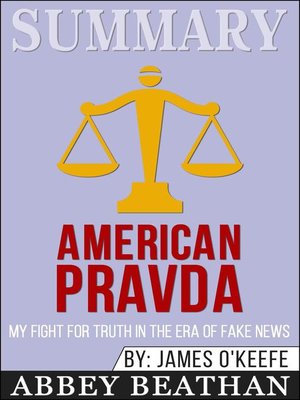 American Pravda: My Fight for Truth in the Era of Fake News by James O'Keeefe | Book Summary | Abbey Beathan

(Disclaimer: This is NOT the original book.)

Read all about Project Veritas, a haven of journalism where they find out and report the truth, the whole truth and nothing but the truth.

We are on an era that has all kind of new and beautiful things, a time of innovation and unstoppable technological evolution. However, journalism has been on the decline for quite a while and instead of improving over time like many things in this age, it's getting more corrupted by the minute. Journalism has been filled with fake news that have clouded the judgement of American folks and it isn't showing any sign of improvement. Is there anything we can do to make journalism a medium where you are certain you are being told the facts and nothing else?

(Note: This summary is wholly written and published by Abbey Beathan. It is not affiliated with the original author in any way)

"The left makes huge claims about government and its capabilities. Those who manage the government and other publicly funded social services all too often persuade themselves of their virtuousness, even if their virtue is subsidized with other people's money." – James O'Keefe

Controversial journalist James O'Keefe has had enough of the lies we are being fed everyday so he decided to start Project Veritas, an independent news organization dedicated to tell the unabridged truth without being afraid of the consequences. Conformed by a team of journalist who have a respect for the job, they infiltrate political campaigns, unmask lies that are being told in the news and expose voter fraud. It acts like a superhero organization but instead of fighting an specific bad guy, they fight against lies and in this book, you'll read all about Project Veritas.

It's time to learn about the organization dedicated to make journalism something pure that we trust instead of a political tool.

P.S. American Pravda reveals how dishonest journalism currently is and O'Keefe's effort to stop it.

P.P.S. It was Albert Einstein who famously said that once you stop learning, you start dying. It was Bill Gates who said that he would want the ability to read faster if he could only have one superpower in this world. Abbey Beathan's mission is to bring across amazing golden nuggets in amazing books through our summaries. Our vision is to make reading non-fiction fun, dynamic and captivating.

Ready To Be A Part Of Our Vision & Mission? Scroll Up Now and Click on the "Buy now with 1-Click" Button to Get Your Copy.

"One of the greatest and most powerful gift in life is the gift of knowledge. The way of success is the way of continuous pursuit of knowledge" - Abbey Beathan

Summary of American Pravda
Copy and paste the code into your website.
New here? Learn how to read digital books for free