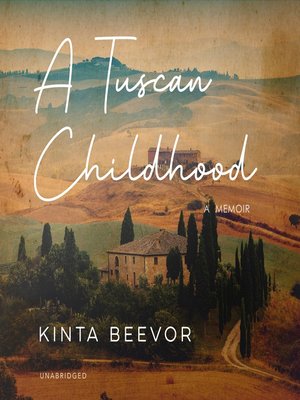 The enchantments of the Tuscan countryside are captured in this memoir of the idyllic Bohemian life the author shared with her family in their Italian castle in the years between the two world wars.

When Kinta Beevor was five years old, her father, the painter Aubrey Waterfield, and her mother, a writer, settled their family into a castle near the Tuscan village of Aulla. It became the center of an artistic world that included D. H. Lawrence, Robert Trevelyan, and Rex Whistler. While the adults wrote and painted, Kinta and her brother explored the castle and the nearby Florentine villa of their great-aunt Janet Ross. They helped with the grape and olive harvests, accompanied the stonemason in his search for wild mushrooms, learned how to "tickle trout." They spent their summers in tents in the mountains, with shepherds and their charcoal burners. The family fled at the approach of war, which destroyed the town and damaged the castle. But Kinta would return to witness the courage and skill of the Tuscan people as they rebuilt the castle, the town, their lives, and her memories.

Engaging, lyrical, and witty, A Tuscan Childhood evokes the splendors of rural Italy and what it was like to be a child blissfully ensconced there.

Kinta Beevor was born in 1911 in Northbourne, England, and died in 1995. A Tuscan Childhood, published in Great Britain in 1993, was her only book.

More about Kinta Beevor
A Tuscan Childhood
Copy and paste the code into your website.
New here? Learn how to read digital books for free