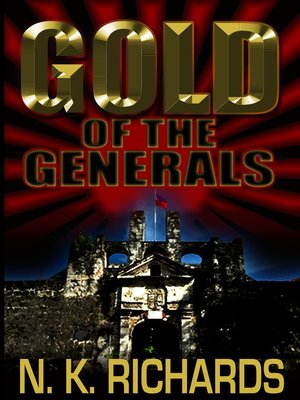 Gold of the Generals

Gold of the Generals is a classic adventure story, great for a lazy afternoon, or for that long international flight. It starts in the exotic and history filled ruins of the Spanish Empire in Manila, and spreads to the jungles and beauty of Papua New Guinea. It has drama, romance, history, tragedy and treachery all tied up in fast paced, moving smorgasbord of exotic locations. We meet a range of characters, each with their own problems to solve, as they take up the challenge of looking for the gold and treasures, secreted by the Japanese forces as they escaped from Rabaul late in 1945.

PACIFIC LOOT is a surprisingly good adventure novel in the unusual setting of Rabaul, New Guinea — one of the world's most beautiful but little-known places. As Volume One of Nic Richards' series GOLD OF THE GENERALS, it gets off to a good start by taking us from the familiar surroundings of Manila to the volcanic cone of Rabaul, where the Japanese Imperial Army hid weapons and war looted gold in a swiss-cheese of caves.

Richards builds an entertaining and suspenseful plot around a group of odd-ball characters involved in the hunt for "black gold", in the literary tradition of Alistair McLean's GUNS OF NAVARONE and WHERE EAGLES DARE.

Happily, this is not just another secret agent rip-off. The characters are highly original loose cannons, their dialogue rich with regional accents that Richards captures nicely. And the climax is suitably suspenseful and explosive.

author of GOLD WARRIORS and THE YAMATO DYNASTY

Nicholas (Nic) grew up as a young boy into a teenager on Thursday Island in the Torres Straits of North Queensland, Australia in the sixties and seventies. The sea and the islands have always been a part of his life, filled with days of swimming, ...

More about Nic Richards
Gold of the Generals
Copy and paste the code into your website.
New here? Learn how to read digital books for free