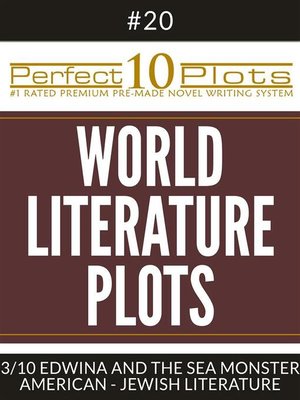 ChildrenEducationLiterary CriticismNonfiction
Edwina Oakhurst is the daughter of Solomon Oakhurst, an aquarium keeper at the local amusement park in a New York neighborhood. Oakhurst is a strange fellow – he exhibits creatures of the deep in his aquarium. One of these is his daughter. She pauses as a giant squid in one of the aquariums. Edwina is a strong swimmer. One night while swimming the Hudson River, the currents take her to a park where she spends the night in a hollow tree. In the morning she meets Samuel Melham, a news photographer. The two of them further their acquaintance until Samuel tells Edwina that his friend Mr. Cohen lost his daughter recently and believes that she drowned in the Hudson. A few days later, Edwina finds Sabina's body and brings it to her father's aquarium. Mr. Oakhurst has no intention of returning the body to Mr. Cohen. He means to use it as a "monster exhibit". Edwina is appalled. Ultimately Samuel and Edwina manage to rescue Sabina's corpse from its terrible fate and to bring it back to the nearest synagogue. The rabbi recognizes Edwina – she is the daughter of Hannah – a Jewish lady who drowned years ago in the Hudson River. When Edwina and Samuel go back to the aquarium to confront Oakhurst, it's too late – the aquarium is going up in flames. Will Edwina's father survive the blaze? Will Samuel and Edwina manage to move past the horrors of their youth?
—-
About Perfect 10 Plots:

Do any of these apply to you?
When you finally sit down to write - you got nothing. Zero. Zip. Nada?
You just can't find the time to write?
You see numerous authors cashing in with their books - but don't know how they can write so quickly?

Since 2014, Perfect 10 Plots has been the #1 Preeminent Pre-made Plots Brand used by thousands of writers as well as professional ghostwriters and international publishing houses worldwide.

You can take these plots and turn them into huge profits with just about any writer — either you can follow these complete outlines to create your own story or hand them off to a ghostwriter to develop into high-quality books.

Get into the "flow" of writing lightning fast and write for longer and with more enjoyment!

Work like a bestselling author and eliminate all the guesswork to creating bestselling stories!

Fall back in love with writing... all over again!

Full outline for each plot (including the beginning, rising action leading to climax, climax description, falling action after climax occurs, and the resolution)

The One and Only Perfect 10 Plots Signature "Scene by Scene" detailed breakdowns that guide you step-by-step to "put some meat on the bones" and create an absolutely unforgettable story!

Character Descriptions: A list of the main characters (including the protagonist and antagonist) - fully described. These characters are well-developed but not complete... leaving you plenty of room to personalize them.

Details on Settings and Locations: This describes in detail where the story takes place. As you read this, you'll feel as if you're right in the scene of the story! (making it easy for you to put yourself inside the story, customize it and produce unique works of art)

Enough "raw ingredients" to write a full-length story that is truly your creation (completely designed and imagined by you)!

So what are you waiting for?

Stop dreaming and start writing and publishing in the fastest,...
ChildrenEducationLiterary CriticismNonfiction

Perfect 10 World Literature Plots #20-3 "EDWINA AND THE SEA MONSTER – AMERICAN--JEWISH LITERATURE"
Copy and paste the code into your website.
New here? Learn how to read digital books for free