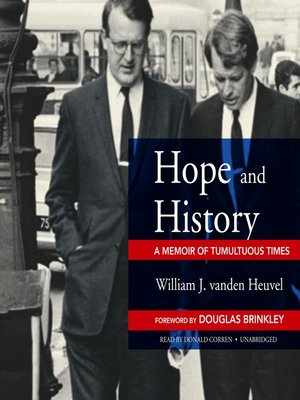 A Memoir of Tumultuous Times

Hope and History is both a memoir and a call-to-action for the renewal of faith in democracy and America.

US Ambassador William J. vanden Heuvel presents his most important public speeches and writings, compiled and presented over eight decades of adventure and public service, woven together with anecdotes of his colorful life as a second-generation American, a soldier, a lawyer, a political activist, and a diplomat. He touches upon themes that resonate as much today as they did when he first encountered them: the impact of heroes and mentors, the tragedy of the Vietnam War, the problems of racism and desegregation in America, tackling the crisis in America's prisons, America and the Holocaust, and the plight and promise of the United Nations. Along the way, he allows us to share his journey with some of the great characters of American history: Eleanor Roosevelt, William J. "Wild Bill" Donovan, President John F. Kennedy and RFK, Harry S. Truman, and Jimmy Carter.

Throughout, vanden Heuvel persuades us that there is still room for optimism in public life. He shows how individuals, himself among them, have tackled some of America's most intractable domestic and foreign policy issues with ingenuity and goodwill, particularly under the leadership of President Franklin D. Roosevelt and those who sought and still seek to follow in his footsteps. He is not afraid to challenge the hatred and bigotry that are an unfortunate but undeniable part of the American fabric. He exhorts us to embrace all the challenges and opportunities that life in the United States can offer.

Douglas Brinkley, the author of numerous New York Times and award-winning bestsellers, is a professor of history at Rice University, the CNN Presidential Historian, and a contributing editor at Vanity Fair and Audubon. He is a member of the Societ...

William J. vanden Heuvel, a US ambassador to the United Nations, is the author of On His Own: Robert F. Kennedy, 1964–1968, editor of The Future of Freedom in Russia, and coeditor of The Auschwitz Reports and the Holocaust in Hungary.

More about William J. vanden Heuvel
Hope and History
Copy and paste the code into your website.
New here? Learn how to read digital books for free